Santa Monica Pier is a world-famous landmark that offers a wealth of photographic and filmmaking opportunities. Located in beautiful Santa Monica, California, the pier stretches out into the Pacific Ocean and is home to a variety of attractions, including an amusement park, an aquarium, and a historic carousel.

For photographers, the pier offers a wide range of subjects to capture. The colorful and historic architecture of the pier itself makes for a stunning backdrop, while the bustling crowds and vibrant atmosphere provide plenty of opportunities for street and candid photography. The pier is also home to a variety of wildlife, including seagulls and dolphins, making it a great spot for nature photographers.

Filmmakers will also find plenty of inspiration at Santa Monica Pier. The pier's iconic setting and rich history make it a perfect location for music videos, commercials, and other projects. The pier's many attractions and activities, such as the amusement park rides and the aquarium, provide endless possibilities for creative storytelling.

The Santa Monica Pier has been a popular location for movies and TV shows over the years due to its iconic setting and rich history. Some notable examples include:

Forrest Gump (1994): The iconic scene in which Forrest (played by Tom Hanks) runs across America ends at the Santa Monica Pier, where he finally stops and sits on a bench to rest.

The O.C. (2003-2007): The pier appears frequently in this teen drama as a hangout spot for the main characters.

Iron Man (2008): The pier's historic carousel is featured in the scene in which Tony Stark (played by Robert Downey Jr.) proposes to Pepper Potts (played by Gwyneth Paltrow).

The Net (1995): The pier's amusement park is featured prominently in this cyberthriller starring Sandra Bullock.

The Sting (1973): The pier's historic carousel is featured in the final scene of this classic film starring Paul Newman and Robert Redford.

This is just a small sampling of the many movies and TV shows that have been filmed at the Santa Monica Pier. The pier has appeared in countless other productions over the years and continues to be a popular location for filmmakers.

Overall, Santa Monica Pier is a must-see location for photographers and filmmakers looking to capture the beauty and excitement of Southern California. 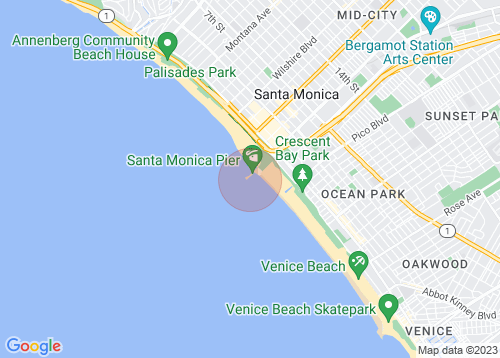